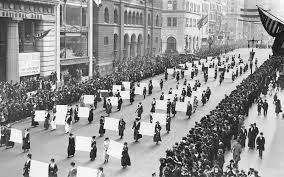 As the month of February rolls around, a lot of us automatically think of Valentine's Day. But I imagine you  might like to read about something different this year, so I looked for famous people born during February.

The most obvious candidates are Washington and Lincoln; that's why President's Day is in February, after all. But we all know a good deal about both of them, don't we?

And then there's Susan B. Anthony.

Most of us can say, "She was a famous suffragette," which is why she was featured on a United States dollar coin a while ago. After that, we're sort of stuck - right? Not everybody even knows that the word "suffragette" was often intended as an insult in her time! (Feminists as well as historians now prefer "suffragist" for those concerned about voting rights.)

So now that I've educated myself about her, for my February letter I'd like to share some of what I've learned with you.

Susan Brownell Anthony was born February 15, 1820, in Adams, Massachusetts. She was the second of the eight children of Daniel Anthony, a cotton manufacturer, and Lucy Read Anthony. The family were Quakers, although Lucy declared she wasn't good enough to be one! Daniel didn't believe in toys or games for his children. However, he did believe in "complete personal, mental, and spiritual freedom" in his home. And he was "read out of meeting" for permitting dancing there.

Susan learned to read and write at the age of three. When she was six, the family moved to Battensville, New York. 1826 was also the year of the split among the American Quakers, between the orthodox and the more liberal Hicksite Friends.

In Battensville, Susan at first went to a district school. But when they wouldn't teach her long division - because she was a girl! - her father set up his own school for his daughters. Their new teacher, Mary Perkins, was a role model for the girls as an educated, independent woman.

Like many others, the Anthonys were ruined in the financial Panic of 1837, and everything they owned went to auction. Their most personal belongings were saved only at the last minute when Mrs. Anthony's brother, Joshua Read, bought them.

In 1839 they moved to Hardscrabble, New York. (From www. greenwichny.org, we learn it had been called Franklin, but was then called Hardscrabble because it was difficult for horses to get up the hill. Later it was renamed again; it's now Center Falls.)

That year, Susan went to work as a teacher. She was quite successful in her profession at a time when women earned a quarter of what men were paid for the same work. She continued teaching until 1849, when she moved back to the farm her family now had in Rochester, New York.

That same year, Susan went to work as a teacher. She was quite successful in the profession at a time when women earned a quarter of what men were paid for the same work. She continued teaching until 1849, when she moved back to the farm her family now had in Rochester, New York.

That same year, Susan began speaking in public against the evils of alcoholic beverages. She later helped found the Woman's State Temperance Society of New York, which favored a woman being allowed divorce from a habitual drunkard.

In 1851, Susan met Amelia Bloomer and Elizabeth Cady Stanton. They became fast friends and comrades in campaigns for women's rights.

In fact, Susan briefly wore bloomers, and loved the feel and the convenience. (Compared to tight corsets and heavy petticoats, I think any woman would have.) But she soon concluded they were too much of a distraction for her audiences: "To be successful a person must attempt but one reform. By urging two, both are injured, as the average mind can grasp and assimilate but one idea at a time."

In 1856, she became the agent for New York State of the American Anti-Slavery Society, but even then, and certainly after the Civil War (1861-65), her primary work was agitating for women's civil rights.

In 1872, Susan began demanding the same civil and political rights for women that black males had gained under the 14th and 15th Amendments to the Constitution. She led a group of women to the polls in Rochester on November 5 and cast a vote. Arrested two weeks later, she spent her time before trial making high-profile lecture tours and, in March 1873, attempted to vote in city elections.

Matilda Joslyn Gage defended her at trial. They argued constitutional rights and argued them well, but the verdict was never in doubt. Convicted on June 18, 1873, and sentenced to pay a $100 fine (not a small amount at that time), Susan declared, "May it please your honor, I will never pay a dollar of your unjust penalty."

She never did pay, and the government apparently decided that trying to make her pay would just give her more publicity.

I won't list all of the organizations Susan founded or worked in. By themselves, their names wouldn't mean much. and the details of their frustrations and particularly their infighting are plain depressing.

A biography by Ida Husted Harper, authorized by Susan herself, declares that more than once Miss Anthony and Mrs. Stanton were forced out of the leadership of organizations - including organizations they had founded - which then "passed into the hands of a body of conservative women, who believed they could accomplish by prayer what these two women knew could never be done except through legislation with a constituency of women behind it."

While we may not celebrate Susan B. Anthony's birthday as a national holiday. I think we owe her a great debt of gratitude. Come February 15th, it wouldn't hurt to spend a little thinking about a courageous woman who wasn't afraid to get involved.

But given Miss Anthony's position on liquor, I won't recommend drinking a toast to her!